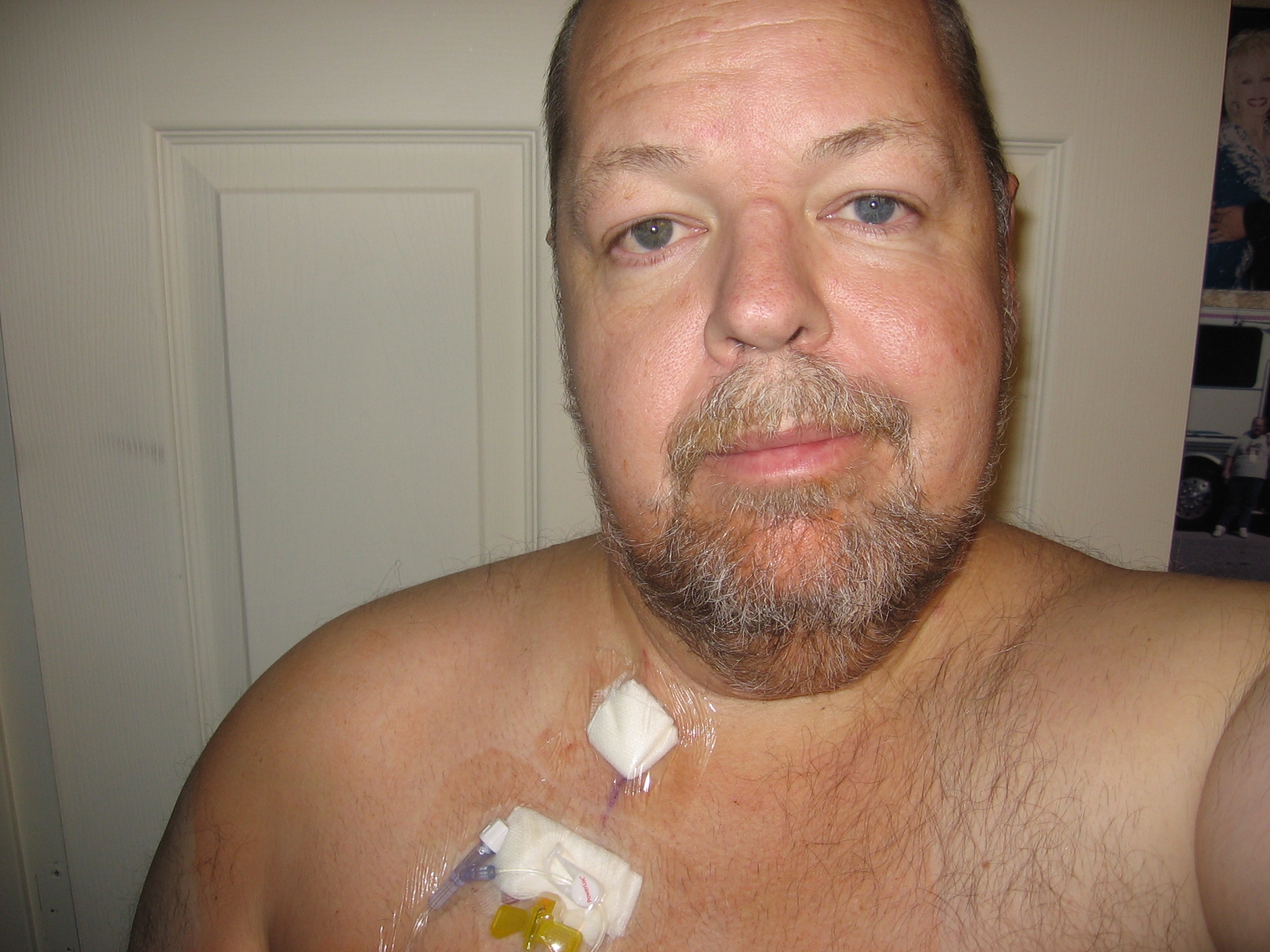 I walked off the stage at the Joe Val Festival in Framingham, Massachusetts, after my last set with The Whites. Little did I know this would be the last time I would play on stage for nearly two years.

I had been sick the entire weekend, and continued to be sick after I returned home. I thought it was just some kind of “bug” that I had picked up and couldn’t seem to shake. When I saw my doctor a few days later, I learned it was much, much more.

After several scans and two surgical biopsies, I was diagnosed with Stage III Hodgkin's Lymphoma, a blood cancer that attacks the body’s lymph nodes. I was just getting ready to celebrate my 49th birthday, one that I thought at the time of my diagnosis might be my last. Within a week, I found myself in a room full of others who were fighting the same demon as I,  began what would be nearly 18 months of intense chemotherapy to try to kill this beast before it killed me. Things I used to take for granted I now realized were a privilege. Just getting up from a chair and taking steps was no longer an easy thing.

As months went by, I found myself fighting a battle like none I had ever fought. The days of traveling city to city playing the music that I loved so dearly were now just a memory. It was like it had all been in another life. The side effects of my chemo made it impossible to play.  I remember one day picking up my guitar and nothing felt right. I couldn't recall how to play. I didn't know how the melodies went. My fingers wouldn't operate like they once did. My hands and my mind pretty much told me that I was finished. The same guitar that used to seem like an extension of my own arms now seemed out of place in my hands. Nothing about it made sense anymore. I remember hanging my guitar on the wall for what I thought was the last time. My cancer doctor had told me that some of the cancer meds would possibly take away my motor skills, as well as damage my sensory and touch. He was concerned about this since he knew I was a musician.

As my condition worsened, my doctor told me that he felt we needed to increase my chemotherapy dosage, but he warned that this could totally take away all my ability to ever play again. It was then that I realized how blessed I had been to be able to play for 37 years, and what a good run it had been.
But it was time. It now became an issue of survival. I told my doctor that I understood the risks, and I was ready to do whatever I needed to do to survive. Music was no longer important. I wanted to be here for my family, and I vowed to do everything I could to be here for them. The hurt and sadness in their eyes was just too much. I couldn't leave them. You just don't realize how much you love someone until you actually have to stare death in the face. I became more determined than ever to win this fight. I also realized I was no longer scared of this beast called cancer. My life became doctor visits, long sessions of chemotherapy treatments, and days of sitting on the couch, too weak to even stand. Still, I always dreamed of a day that I would be well. Even when new scans showed my condition worsening, and my cancer progressing to Stage 4, it never fazed me. I still just thought of the days ahead when I would be well. This was my only way to disconnect from reality every now and then. Something you have to do to stay sane, I guess.

I thought about those I had been fortunate to pick with, and those I wished I had been able to play a tune with. I wrote lists of names of people I wanted to record a project with if I ever got well enough to pick again, a "bucket list" I guess you could call it.

In the summer of 2012, following a trip to Vanderbilt, my cancer went into remission. I was immediately admitted into a stem cell program for 30 days, during which I was given near lethal doses of chemotherapy that would totally kill all my bone marrow.

I received my transplant on September 10, 2012, but the days that followed were the worst ever. I had been told that you have to be taken to the brink of death, and then brought back. It was a very accurate description, as I soon found out.. My blood counts stayed at “0” for days. There were times I could barely stand or open my eyes, but still I fought to be able to get myself up to walk and to not give in. There was still a chance my bone marrow had been overly damaged and could never make blood cells again. Without blood cells, there is no life. I knew I wasn't giving up. After about a week, my blood counts started to rise. It was just a little every day, but my marrow was working! Finally, on September 29, 2012, I was released from the stem cell unit and went home. The long road to recovery lay ahead. During this time, I started thinking about playing again, but in reality, I knew I had lost too much of the skills needed to do this again. It had been two years since I had last picked.

In December 2012, Dale Ann Bradley and Steve Gulley were playing a concert here in town, and I decided to try to get out of the house to go see them. I was barely walking at that time, but I thought I might be able to make it. So I called Dale Ann to tell her I might come see them. She told me to bring my dobro. I did, but I wasn't close to being ready to play again. Dale Ann had me play a couple songs with her as I sat in a chair on stage. Afterwards, she told me that when I was ready to pick again, I had a job with her. This motivated me, so I started practicing again. My hands and mind starting to work again once the chemo drugs left my body.  I felt things starting to come together. I just kept pushing myself. I had always taken picking for granted, but I realized how quick it could be taken away for good. On February 16, 2013, I found myself walking back onto the stage at the Joe Val Festival with The Dale Ann Bradley Band, the same stage where it all ended exactly two years earlier. But this time, a new chapter began. It's like I picked up right where I left off. It's funny how something such as cancer can open your eyes to so many great things. You come to realize how blessed you are, and how blessed you have been. I found out how strong the power of God really is, and there is nothing too big or too small for Him to handle. I realized the power of unconditional love from family and friends, and I found out that God listens to their prayers and mine.

After nearly 2 really good years of being cancer free, I found out my cancer had returned once again on June 1, 2014 following a scan. After 6 rounds of chemo which was completed in early December 2014, I received a totally clear PET scan on January 5th 2015. In August 2015, my cancer returned for a 3rd time. This time I entered a clinical trials program at Vanderbilt Hospital in Nashville, TN using a new class of immunotherapy drug called "Nivolumaub". The drug was tolerated well, and a scan in October 2015 showed that I was once again clear, and now a THREE TIME survivor !!

Once again, I am cancer free, and now a 3-time survivor. As long as I have fight left in me, I'm gonna be swinging. I enjoy life too much. I have too many who are counting on me. I want to be a good example to others who are fighting this same fight. I want to show them it can be beat.

Well, in June of 2019 I was admitted to The University Of Tennessee Medical Center with a diagnosis of Pneumonia, E-Coli, Sepsis ans Shingles. While in the hospital, it was found out that my cancer had returned. I had last been sent into remission the 4th time with the clinical trial drug Nivolumab. Very strange, but 2 weeks before I was admitted to UT, a new cancer doctor became employed there. His name was Dr Ramchandren. His specialty was Hodgkin's Lymphoma. I also found out that he was one of the doctors responsible for the development of the drug Nivolumab that I had been on in clinical trials. This drug had since been released to be used on many cancers. It was now known as Opdivo. Dr Ramchandren had also found the drug required a maintenance dose to be effective. I was very sick at this time, and was not sure if I would make it this time. Upon release from the hospital, I could only walk using a walker, and it was a struggle trying to even walk with that. Dr Ramchandren wasted no time getting me back on the Opdivo. After 3 monthly doses, I was back in remission. A 5-time survivor!!!  As of December 2019, I am still clear and getting around very good on my own. Back to driving and totally clear of the Pneumonia, E-Coli, Sepsis and Shingles. Still 100% clear of cancer, and now on monthly maintenance doses. Once again I was well and doing good. God still has plans for me, and I know without a doubt he put everything in place. What was the odds of Dr Ramchandren coming to UT  to work only 2 weeks before I was admitted. This being the same doctor that helped to develop the drug the saved my life during clinical trials? It was not just coincidence that this all came together...